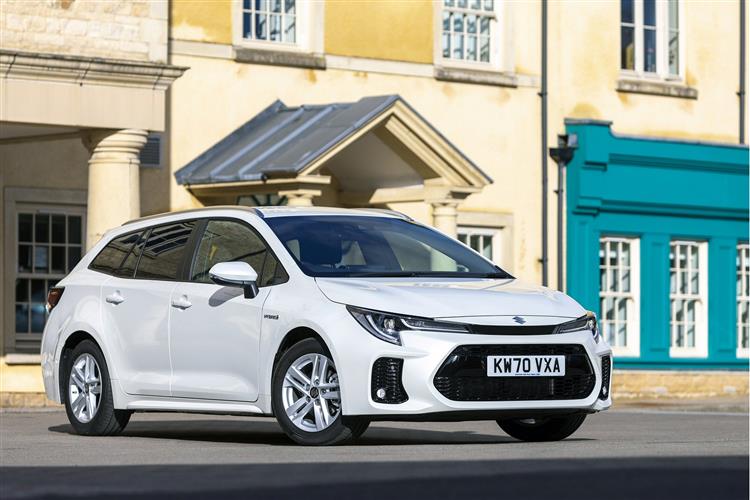 Suzuki is, literally, on a charge. Not only has it electrified its entire range, but it has also expanded it, albeit with more than a little help from its technical collaborator, Toyota. In this, the second model of that partnership, the curiously-named Swace borrows the design of the familiar, respected Toyota Corolla Estate to give the Suzuki brand an entrant into the lucrative C-segment compact estate segment. Is it convincing enough, however, to win Suzuki some new friends?

Suzuki might have yet to launch a full EV, but at least for now, they appear on the face of it, to be doing their bit for automotive electrification. All their core models have mild hybrid electrified petrol powerplants and, thanks to a partnership with Toyota, the company's flagship model, the Across SUV, offers a plug-in hybrid powertrain. Only a self-charging full-Hybrid engine was missing from the portfolio, and that's now provided by this Swace compact estate. The Swace brings the brand into a market sector it's been absent from since it offered the Baleno estate at the turn of the century - but that car never sold that strongly. Perhaps now, with the added draw of required technology, it will be a different story.

The Swace combines a 1.8-litre, 102bhp engine with a 53kW electric motor and delivers drive through a CVT gearbox. Whilst not scintillating, performance is acceptable with a 0-62mph time of 11.1 seconds, whilst top speed is pegged at 111mph. Combined, the engine and electric motor offer a relatively seamless driving experience, where three driving modes can be selected - 'Normal', 'Eco' or 'Sport'. The driver can also select a fully electric 'EV mode' for those times when completely silent, or emission-free, running is preferred, such as for inner city work, or even early morning starts. In this mode, the car has the potential to cover a mile or so on pure battery power. 'EV mode' can be used for driving short distances without having to worry about noise or emissions, especially in residential areas early in the morning and late at night, or in garages and indoor parking lots. Combining both engine and electricity, however, can still reap the environmental rewards depending on what you select. 'Normal' mode will give the driver the optimal balance between fuel economy and performance, whereas 'Eco' will enhance the fuel economy through throttle response and even go as far as limiting the air-conditioning. 'Sport' will provide a quicker throttle response to emphasise the acceleration when needed.

Much like the Across SUV, the Swace almost exactly mirrors its Toyota cousin in design, save for a unique front face with LED headlamps and prominent Suzuki badges. Only available as an estate, the Swace is quite a sharp-looking car - and a far cry from the rather forgettable Baleno estate, Suzuki's last offering in this class. A strong, dynamic crease blends out from the front wheel arch towards the rear, breaking the side profile embellished by standard 16-inch alloy wheels. Moving inside, the Swace offers little differences over its Corolla cousin. The driver's interface is dominated by the central 8-inch touchscreen, which is mounted high on the dashboard and features 'Apple CarPlay' and 'Android Auto' smartphone-mirroring as standard. Soft-touch plastics with chrome and silver accents throughout help lift the ambience of a slightly dark interior, which gets rear privacy glass and Piano Black instrument surrounding trim. There's room (just about) for three adults on the rear bench. And out back, there's a class-competitive 596-litre boot. The luggage compartment can be easily expanded into a fully flat space by using a remote folding lever to fold down the second-row seats, which creates a total loading space of up to 1,606-litres. Privacy needs are addressed with a detachable tonneau cover that can be retracted with a single touch, and the luggage compartment is equipped with auto-illuminating lights and DC12V accessory socket for added convenience.

Entry to Swace ownership starts at around £27,500 - that's for base 'SZ-T' trim; plusher 'SZ5'-spec costs around £1,800 more. These figures might look a little high at first, but when you take into account the sophisticated full-Hybrid tech and look at the high-level of equipment fitted, they might seem a little bit more palatable. Also, the fact that this is an estate model brings an element of practicality into the mix too. Rivals to the car are a mixed bag, with many not offering this car's full-Hybrid efficiency. Of course, the biggest competitor to consider will be the Toyota Corolla Touring Sports estate model this Swace is based upon; one of those costs around the same as a Swace in the plusher levels of trim needed to match this Suzuki's 'SZ-T' and 'SZ5' trim levels. Potential customers might also be looking at estate versions of the Ford Focus, the Volkswagen Golf, the SEAT Leon or the Skoda Octavia with mild hybrid engines. For a little more, you could get a Kia Ceed Sportswagon PHEV with Plug-in hybrid tech and a lot more battery-only driving range. Standard Swace equipment includes heat for the front seats and steering wheel, 'Apple CarPlay' and 'Android Auto' smartphone-mirroring, plus automatic headlamps and wipers as well as dual-zone climate control. The 'SZ5' adds a wireless charging pad for your mobile, bi-beam headlamps, 'Blind Spot Monitoring', 'Rear Crossing Traffic Alert' and 'Simple-Intelligent Parking Assist' to the impressive tally.

The hybrid system fitted to the Swace gives reasonably impressive fuel economy and running costs without the need for plugging in. The combined fuel economy figure is up to 64.2mpg according to WLTP figures, with emissions of just 99g/km. That's assuming you activate the provided 'Eco' drive mode, which helps the driver accelerate in an eco-friendly manner and enhances fuel economy through more gradual throttle response and minimal air-conditioning use. This mode is useful during stop-and-go city driving. Clever touches also help, like the 'S-Flow Control' in the air-conditioning which allows the climate system to detect the number of occupants and take into account the ambient temperature, then altering its output accordingly, thereby saving energy where possible. That's the same as in a Corolla. One area where Suzuki does drastically differ from the Toyota equivalent is with its warranty, only offering a 3 year/60,000 mile warranty, as opposed to the 5 year/100,000 mile you get with the Corolla.

It might seem odd that Suzuki, often previously such an innovative manufacturer, would merely re-badge a Toyota to widen its electrified model offering. This technology though, demands years of experience and huge investment. Should Suzuki have made its customers wait for full-Hybrid tech - then charge them richly for it? Or use proven tech from an established partner, allowing them to bring this engineering quickly to market at a (relatively) affordable price? You can see why the second approach makes more sense and this Swace model fully embraces it. For the money you'd spend to get mild hybrid tech that makes hardly any difference to running costs on comparable estate versions of the Golf, the Focus, the Leon and the Octavia, here you get a full-Hybrid powertrain that can, in contrast, run at times exclusively on full-electric power, so delivering significantly lower running costs. If that makes sense to you, this car might too.